We recently published two blog posts explaining how an Oracle Service is implemented using Autonolas. You can read those posts here and here.

In that example, we showed how Autonolas can be leveraged to make a decentralized, autonomous Oracle Service, but the potential of Autonolas Services doesn’t end there — far from it!

Today, we would like to discuss our current work towards building an Autonolas Asset Management Service. Such a service will allow users to delegate control of their funds and autonomously execute the most optimal investment strategy(ies) with them, according to the users’ preferences.

Our research into DAO treasury management in particular has shown that autonomous management could be of great help in putting a DAO’s assets to productive use. You can see the results of that research in this Twitter thread.

In this post we’ll also take a closer look at the technical details, particularly how the composable nature of the stack allows developers to build complex apps and services. Let’s dive in!

As we’ve outlined in earlier posts, an Autonolas Agent Service is composed of a collection of agents, each managed by a different operator. The agents jointly implement the business logic of the service in such a way that they must reach consensus on the operations to be executed. The consensus mechanism ensures the agents agree on the state of the service at every point in time. Hence, as long as a certain threshold of legitimate agents is met inside the service, no collusion of malicious agents can provoke service failures or execute unwanted operations (e.g., rogue investment operations).

To understand the service, let us first consider what a regular user might do when they wish to invest funds into some liquidity pools. At a high-level, this operation can be divided into two tasks: firstly, deciding on an investment strategy (e.g., when to switch from one liquidity pool to another), and secondly, once a decision has been made, executing the actual operation. Similarly, the functionality of an Asset Manager Service can be split into these two domains of responsibility, as detailed next.

The first is a functionality that is in charge of identifying the investment strategy. This functionality can be as simple or as complex as we want. For example, it could consist of a full machine learning model which includes stages such as scraping the appropriate data sources, training and cross-validating the model, which outputs the optimal predictions (according to that model). Note that we are not expecting this part of the service to execute any actual operations on any user’s wallet. It simply states what the optimal strategy is at any given time.

A. Do nothing, because the funds are currently distributed according to the optimal investment strategy received.

B. Do nothing, because the fees of executing the operations would exceed the benefits.

C. Execute a capital swap between liquidity pools to benefit from a more advantageous position (e.g., withdrawing from one liquidity pool and depositing into another that is more profitable, or swapping between assets).

Each of the two responsibilities discussed above have value on their own. A service, which we call APY Estimation Service, could be in charge of making investment strategies publicly available so that other users or services can make use of. They can also select from a number of different investment strategies and make decisions about which one(s) to follow at every moment.

Additionally, a Liquidity Rebalancing Service could feed from a pre-configured investment strategy, that might or might not be the one coming from the APY Estimation Service, and execute the operations on behalf of the users. 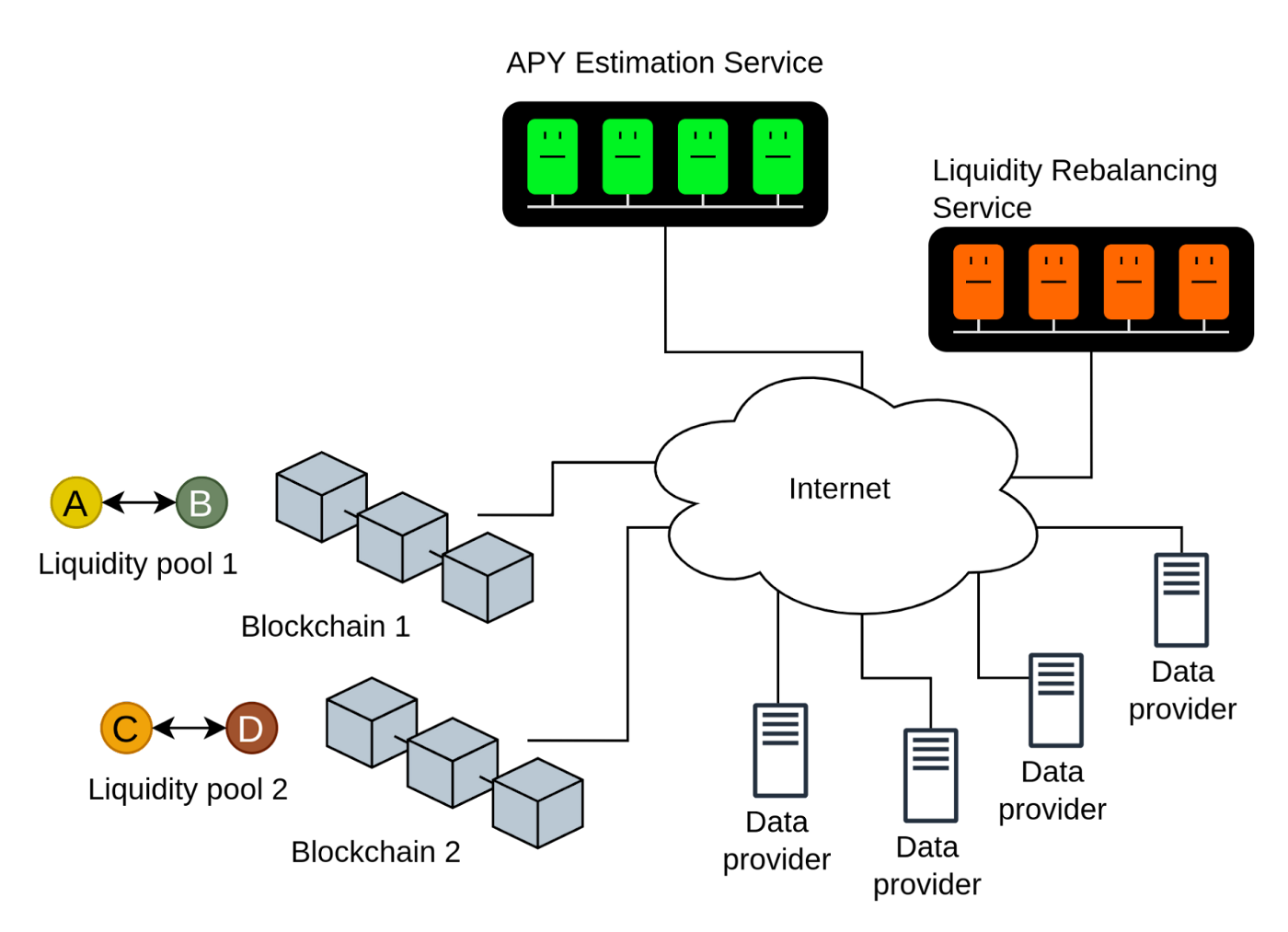 Recall from earlier posts that every Autonolas Service is composed of a number of agents that replicate an application that implements the business logic of the service. Semantically, this application can be broken down into independent stages, each of which achieves a particular task towards completing the objectives of the service. Then, each stage is implemented as a finite state machine (FSM), and, when composed appropriately, they give shape to the global FSM of the service — which is named FSM App.

Below we can see how the different stages (that is, FSMs) are connected in each of these two services.

Many of these stages have already been presented in our [post about the Oracle Service](TK Link), in this diagram only the highlighted ones are new, namely, the Build APY Model, the APY Estimation and the Liquidity Rebalancing stages. For the Liquidity Provision Service, we require:

Observe that the “main loop” of the service cycles through the stages:

Indeed, this should be the usual life cycle of the service if no unexpected conditions occur.

For the APY Estimation Service, on the other hand, there are a couple of stages that are specific to the service:

In this case, the main loop of the service will consist of looping through the two stages:

It is worth noting that the proposed architecture can, of course, be refined according to the service needs and the envisioning of reusability for some of the stages. For example, it would be perfectly legitimate to split the Build APY Model stage into two stages: one in charge of scraping and collecting the data, and the other one in charge of building the model itself.

As described above, these two functionalities can be regarded as independent Autonolas Services which bring value on their own. But they can also be merged into a single Service thanks to the composable nature of the service architecture.

This is a birds’ eye view of what the internals of an Autonolas Asset Management Service would look like when composed using the stages from the two services above: 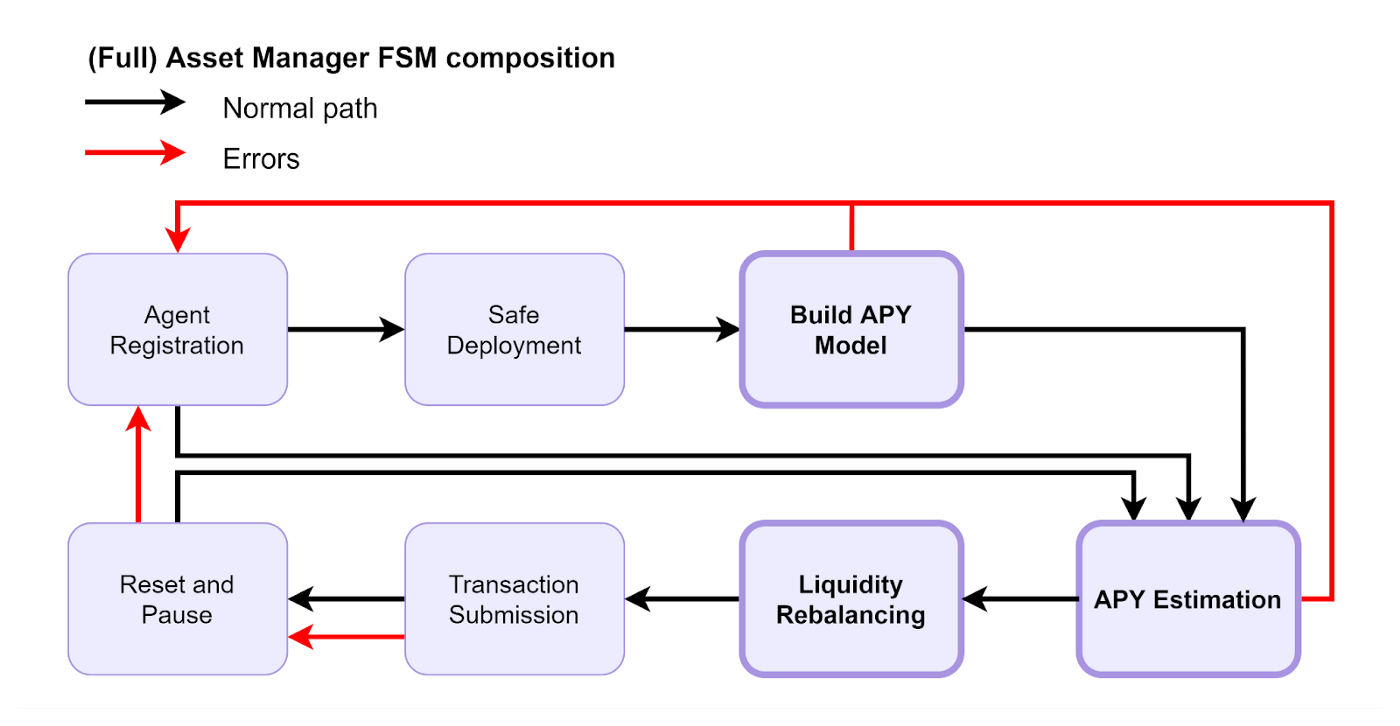 Observe that now the main loop of the service cycles through four stages:

Indeed, this service looks pretty much the same as the Liquidity Provision Service–except that now, the investment strategies are decided internally by the service itself, rather than being provided externally.

Details on a Stage of the Asset Management Service

As can be seen, whether one wishes to implement these functionalities as a two-tiered service, or as a single service, there are three stages that are new (compared to the Autonolas Oracle Service), and therefore they will need to be implemented by the developer. Let’s take a look at what’s going on for one of them–the Liquidity Rebalancing stage.

Recall that each such stage implements an FSM which is replicated across all the agents of the service. In the case of this particular stage, the FSM looks something like the diagram below, which we have simplified slightly for illustration purposes:

The service executes a number of operations at each state, focused on the execution of the investment strategy. More in detail:

As you can see, composability is at the heart of Autonolas apps and services. By allowing developers to make use of, reuse and recombine these various components in flexible structures, we can minimize duplication of effort. Common components can be reused where appropriate and additionally, their composable nature means that they can be nested inside of each other. This will allow for the creation of complex applications that we expect to unlock exponential growth in the wider ecosystem of decentralized services.

If you’ve found what we’re describing here exciting and want to incorporate this technology in your projects, we invite you to reach out to us on Discord and follow us on Twitter. There’s a wide range of potential use cases extending far beyond what we’ve been able to cover here, and we’d love to help you discover and build them, so please get in touch.

Additionally, if you’re a developer interested in building your own apps and services, you may be interest in our Autonolas Academy. The Academy is a self-paced learning experience, with the option, on completion, to apply for a more intensive, cohort-based Builder Track. The program is designed to teach you everything you need to know to develop using our framework. You can get started with those materials here.